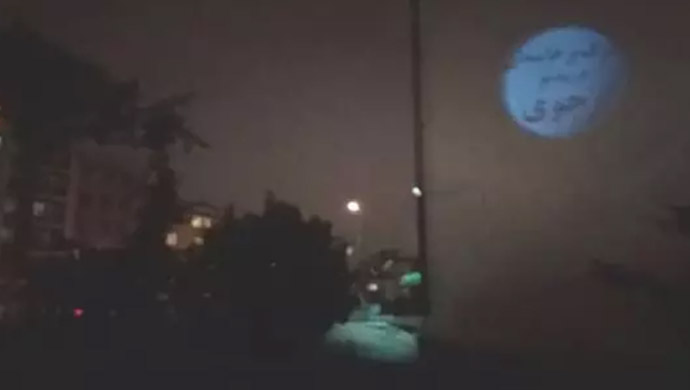 Members of Resistance Units, an expanding network of brave Iranians associated to the opposition People’s Mojahedin Organization of Iran (PMOI/MEK), go on their new trend of anti-regime measures, this fourth dimension in Kermanshah, western Islamic republic of iran, by playing the following slogans in the crowded Vali Asr Street:

“Death to Khamenei! Hail to Rajavi!”

“Death to oppressors! Be it the Shah or [Khamenei]!”

“The merely path to freedom is through overthrowing the authorities!”

“Death to Khamenei! Khomeini is damned!”

This initiative took place on the evening of Sunday, March 13, with many locals welcoming this anti-regime mensurate.

“Khomeini be damned” is a reference to the government’s first supreme leader.

On the evening of Wednesday, March 9, Resistance Units members projected a massive slogan reading “Death to Khamenei! Hail to Rajavi!” on the side of a Highrise located on Tehran’s Jalal Al Ahmad Highway, one of the metropolis’s main pathways.

On the evening of Mon, February 28, the capital, Tehran, and Shahriar, west of Tehran, were scenes of all the same some other circular of similar anti-authorities slogans broadcast in public areas.

During afternoon hours people in the famous Tehran bazaar heard such slogans targeting the regime’s senior officials and calling for the overthrow of the mullahs’ institution.

“Iranians are enlightened, and they loath the Shah and the mullahs!” referring to the Iranian people overthrowing the Shah’due south monarchical dictatorship dorsum in 1979, and the people’due south resistance vis-à-vis to the currently ruling mullahs’ regime.

“Expiry to Khamenei and Raisi!” with the latter referring to electric current government President Ebrahim Raisi, infamous for his straight role in Iran’s summer 1988 massacre of over 30,000 political prisoners, mostly PMOI/MEK members and supporters.

“Decease to the mullahs’ principle!”

In Vali Asr Artery of Shahriar, a city located just west of the Iranian capital Tehran, a similar scene was witnessed with anti-regime slogans aired in public:

“Death to Khamenei! Hail to Rajavi!”

“Decease to oppressors! Be it the Shah or the mullahs!”

“Decease to Khamenei and Raisi!”

It is worth noting that during the November 2019 uprising the urban center of Shahriar was ane of the hotbeds of major clashes between brave protesters and the regime’s oppressive forces. Government resorted to opening live burn down in lodge to quell the protesters, leaving many killed and injured.

February 28 – Shahriar, due west of Tehran, #Iran
Vali Asr Avenue
Anti-government slogans were played:
“Death to Khamenei! Hail to Rajavi!”
“Death to oppressors! Exist it the Shah or the mullahs!”
“Death to Khamenei & Raisi!”
“Damn with Khomeini!”#FreeIran2022pic.twitter.com/TSGQBzptZj

On February 24, reports and video footage from within Iran indicated that members of Resistance Units, a network affiliated to the PMOI/MEK inside Islamic republic of iran, circulate anti-regime audiotapes in the cities of Tehran and Mashhad with slogans confronting the regime played in two crowded streets.

On February 19, people in Tehran’s Tajrish Bazaar were too witness to anti-regime slogans being played in the area. The slogans included:

“Death to Khamenei, Hail to Rajavi!”

“Neither crown, nor turban, the mullahs’ days are numbered!”

Anti-regime slogans were broadcast:
“Death to Khamenei, Hail to Rajavi!”
“Neither crown, nor turbans, the mullahs’ days are numbered!”
“Raisi is the executioner of 1988!”#IranProtests flick.twitter.com/4Nhh6DWflx

On February 11, mark the anniversary of Iran’s 1979 Revolution, anti-regime slogans were broadcast from the loudspeakers of a branch of the Saderat Bank in Shahriar, west of Tehran.

The audio included slogans that called Raisi a butcher, called for the overthrow of the mullahs’ regime, and hailed the Resistance’southward leaders.

A local authorisation is telling the people that the bank’s sound system has been breached and asks them to exit the surface area and non mind to the slogans.

The incident took place a day afterwards similar slogans were broadcast in Fardis, Sarasiab, and Shahr-due east Rey, westward and south of the capital letter, Tehran.

On February 9, similar slogans were heard in Mashhad’southward Bazaar Reza, including:

“Death to Khamenei, Hail Rajavi” calling for the overthrow of the mullahs’ authorities

“Downwardly with the tyrant, exist information technology the Shah or the mullahs”

At the time, locals said the market’s computer system had been breached. The incident came weeks after the regime’s state-run broadcasting organisation was disrupted, leading to footage of Iranian Resistance leaders airing on state TV.